An environmental history of the Anglo-Scottish Union of 1707 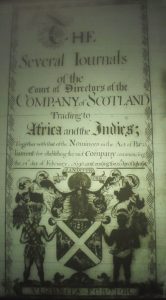 Although this is still a work in progress, my early findings from the work funded by the Society of Antiquaries of Scotland provides many new aspects to my research. While I am still going through several accounts of settlers at Darien, early findings provide examples between the actual conditions in Darien and what was expected. It seems there was a breakdown in communication between the board of directors of the Company of Scotland in Edinburgh and the council and colonizers in Darien. The original supplies were intended to last a year, but soon ran low within six months after departure. The council in Darien wrote to the directors in Edinburgh to be resupplied, but no help arrived before they abandoned the isthmus. It has become more apparent that the settlers had different priorities when they landed in Darien besides food for subsistence. Planting was their third priority behind building shelter and building fortifications. One settler said that they did not consider planting because they were too busy building. Other accounts suggest that the land provided abundant food, but this seems to have quickly gone away as settlers relied too heavily upon the land. The abandoning of planting from an early stage seems influenced by their arrival during the end of the rainy season, which heightened the need for shelter. Nevertheless, a truncated growing season occurred shortly thereafter where some crops were grown, as reports stated that crops “grew in five weeks’ time.”

I have found reports demonstrating how adverse environmental conditions in Scotland made it difficult to acquire the necessary resources to outfit as many ships and people to Darien on resupply missions. The Duke of Hamilton’s papers are quite helpful in this matter. He commissioned a ship for Darien but had much difficulty finding supplies to send as many people to Darien as he had hoped. Many reports in the Public Records Office demonstrate the dearth and famine occurring in Scotland during the 1690s, which had a direct effect on the ability to supply the colony at Darien. Because of the famine, many people were willing to colonize Darien. The directors of the Company in Edinburgh commented that they had plenty of volunteers for Darien, however, they lacked the “right” volunteers to send. The ‘right’ volunteer was a skilled labourer or artisan such as a smith, metallurgist, or engineer.

The other promising aspect I found is in the early acts of the Company of Scotland. Immediately after moving to Scotland, their second act after their bylaws was to find a way to promote the Scottish fishing trade. This occurred many times in the early pages of the Company’s notebooks and demonstrates that some change occurred within the fishing industry, which fits the climatology suggesting that a change had occurred in the water temperatures and the fish left some areas. In addition, it shows how important this industry was to Scotland and the idea of repositioning Scotland within the economic balance of power of the late seventeenth century. Investors clearly thought about how this company would help both their investments and the country become more powerful. Something that I have yet to see any commentary on, was the importance of the salt trade and salt manufacturing within Scotland. Along with the fishing industry, the second act of the Company of Scotland was to find a way to promote the salt trade and manufacturing of salt. This soon developed into an effort to buy land for salt and to use this within the fish trade, which confused many within Scotland as several of the Company’s investors were unsure why it invested in the salt trade rather than trading in the Indies or Africa. Some felt this encroached upon their business as the Company sought a monopoly over the new manufacture of “salt upon salt.”

While still in the developmental process, there is abundant valuable material for my project/dissertation moving forward. Without the funding of the Society of Antiquaries of Scotland, none of this would have been possible. For example, the Company’s involvement in the fisheries and the salt trade, which are directly relevant to my project, is absent from current narratives of Darien and within the printed materials of the Company. The ability to visit the archives of the Royal Bank of Scotland and the Public Records Office made this research possible, and this is thanks to the Society of Antiquaries of Scotland.