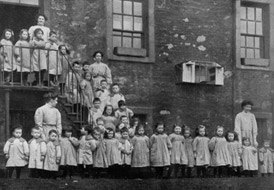 Dr Darling’s major new article ‘Womanliness in the Slums’, based on the Society funded research below, is now on Early View on the Gender & History website: http://onlinelibrary.wiley.com/doi/10.1111/1468-0424.12287/full

This project seeks to explore and document the wave of innovative voluntary welfare and urban renewal activity which took place in the teeming slum district into which the historical Old Town of Edinburgh had evolved during the nineteenth century. These little-studied experiments, which spanned the 1890s to ca.1918, offered a model of welfare provision at a time when the purpose and nature of social welfare, to whom and by whom it should be provided, and where, was a matter of intense debate. The project will thus draw attention to the Scottish contribution to the evolution of welfare theory at a crucial point in its history.

The experiments were instigated by reformers who included members of the Charity Organisation Society (COS); Patrick Geddes and members of the Edinburgh Social Union; the community of women doctors in Edinburgh; teachers at North Canongate School; and the Episcopal Church of Old St Paul’s (OSP). All were motivated by a concern for the minds and bodies of the urban poor, and a desire to enable them to realise their full potential as citizens through the creation of new material and social environments. Crucially these were enacted within the existing urban fabric along and around the Royal Mile, re-habilitating and thereby preserving its historical architecture, in the belief that a renewed sense of place further strengthened ideals of citizenship and belonging.

To date work on this collective activity and the sites in which it took place – much of it largely unstudied – has documented work including a survey of poverty in the area conducted by the COS and the North Canongate School, medical welfare work (the Dispensary set up by Elsie Inglis in the High Street, and that of the OSP in a former type factory in the Canongate); the OSP’s other welfare schemes which included a ladies’ settlement, district visitors, a social club (which shared premises with its dispensary) and a kindergarten, St Saviour’s Child Garden (SSCG), based from 1908 in Chessel’s Court, a fine 18th-century mansion tenement rescued by Patrick Geddes from demolition; and the hitherto little-known collaboration of Geddes and his daughter Nora (a professional gardener) with the SSCG’s founder, Lileen Hardy, in the creation of urban gardens in the Canongate. In addition, a survey of the relevant secondary literature on welfare history, gender and philanthropy, medical history, church history and kindergarten history has been combined with work on relevant archives including those of the British Association of Early Childhood Education (LSE), the papers of Patrick Geddes (University of Strathclyde), the Edinburgh Social Union, and the Edinburgh kindergarten movement (Edinburgh Central Library) and the archives of the OSP and SSCG (Edinburgh City Archives).

This process has, in turn, brought new information and further archival sources to light, particularly related to individual protagonists in the various projects, such as the family of H.D.Littlejohn (Medical Officer of Health for Edinburgh), records of the Edinburgh School Board, Records of the Edinburgh Association for the University Education of Women; Bruntsfield Hospital Archives. Funding from the Society of Antiquaries of Scotland is allowing me to complete this archival research, alongside library based research, particularly into the history of child welfare and early childhood education at the beginning of the twentieth century. The intention is to work up the findings into a series of articles for both academic and more popular audiences.