To mark the launch of their new book, The Fortification of the Firth of Forth, Gordon Barclay and Ron Morris discuss the book and the research that led to it, some of their most exciting discoveries, and the wider field of conflict archaeology.

Cover of The Fortification of the Firth of Forth

1. What first drew you to researching the Firth of Forth defences?

Ron Morris: I have a long-held passion for the various islands in the Firth of Forth and am keenly interested in their wildlife as well as their civil, ecclesiastical, military and naval histories. In the days before the internet very little was known about their military and naval histories, but about 30 years ago I was fortunate to meet people who had served on some of the coast batteries in the Forth, including those on some of the islands, who provided me with many valuable documents and oral information. This started my research into the fortifications of the Forth which has continued on and off until the present day.

Gordon Barclay: The stimulus was work for Historic Scotland and RCAHMS on the built heritage of the First World War, when I became aware of the wealth of documents, charts and plans of the coast defences around Scotland.

2. How would you sum up your book in 200 characters or less?

RM: It is a detailed account of the latter-day coast defence batteries and anti-submarine defences in the Firth of Forth, set up to protect the vital facilities within the estuary.

3. Why is it important that this book was written?

GB: The Forth was described at its peak as the most powerful naval fortress in the British Empire. It was also one of the key naval anchorages in Britain.

Inchgarvie from the south © Gordon Barclay

Memory is fading of the Forth being filled with ships. The remains of the defences are well preserved and offer a major opportunity, as yet scarcely exploited, for education and interpretation.

RM: For a long time, details of this part of Scotland’s military and naval history were largely unknown. However, recent years have seen increased interest in these types of defences throughout the UK. This book will provide the means to greatly increase public understanding of this very important aspect of Scotland’s history, not just for the Firth of Forth, but throughout the country as many national defence considerations are covered.

4. What were the biggest challenges you faced while researching this book?

GB: Getting to all the defence sites. Some are on private land, while many of the important sites are on islands that are difficult to access and very dangerous to explore.

5. What was the most surprising information you learned while researching this book?

GB: There were so many surprises that it’s difficult to select one. The discovery of Archibald Ross’ wonderful sketches of life on Inchkeith in the First World War was one: we found out about them because two people, one of whom knew Ron and me, started talking to his daughter at a lunch.

More generally, the sheer complexity of the development of the defences was a surprise; that was revealed by our very wide-ranging trawl for evidence of all kinds: aerial photography, historical mapping, and thousands of archival documents.

RM: One of the main surprises which stands out for me was the lack of defensive minefields in the Firth of Forth during the Second World War. Anecdotal accounts and some writings have stated the Forth was heavily mined against seaborne threat. However, these accounts are largely based upon propaganda dating from the war period. The truth is that at the start of that conflict there was hardly a mine to be spared for the Firth of Forth.

A small uncontrolled minefield was indeed set up in the vicinity of the Bass Rock at the start of the war but this was soon replaced by anti-submarine indicator loop and harbour defence ASDIC detection measures, stretching right across the estuary mouth. Controlled minefields were eventually set up in the channels north and south of Inchkeith, but the approaches to the estuary were protected by phantom minefields which became established as historical ‘fact’ until now. 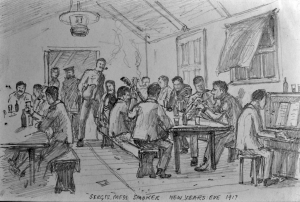 6. What is the significance of the Forth defences in the context of Scotland’s military and naval history, and conflict and battlefield archaeology?

RM: For the period we cover in our book, the coast artillery and anti-submarine measures in the Forth were the most important in Scotland. They were a defence against seaborne attack to protect vital facilities such as Royal Naval Dockyard Rosyth, the Royal Naval anchorages in the river, the Forth Rail Bridge, mercantile trade and convoy anchorages, among others.

Sites at Inchkeith and Kinghorn are important because these are the only two places in Scotland that were fortified and maintained continuously throughout the last period of coast artillery defence (1880-1956). Every other site in Scotland was only fortified during one or both world war periods. Unfortunately most of the fortifications at Kinghorn have since been replaced by housing developments, but at Inchkeith, most of the important structures still survive, making it the most important site for the remains of coast artillery defences in Scotland.

7. Are there any other sites in Scotland with similar levels of defence remains?

GB: The Clyde estuary was also heavily defended, and it’s exciting that Historic Environment Scotland is undertaking a comprehensive survey of the surviving remains.

Scapa Flow was in use for only short periods during the 20th century, but those periods were at times of great danger to Britain, and the Flow was the base of the main home fleets: consequently it was very heavily defended. Geoffrey Stell is documenting these defences, and the first of his comprehensive volumes (on WW1) has already been published (Orcadian 2011).

Allan Kilpatrick is working on the defences of the Cromarty Naval Base, almost the Cinderella of Scottish naval ports.

RM: The only other location in Scotland which has comparable remains of defence measures is Orkney. However, there are many other sites, both small and large, which have surviving remains from their past defences. Sites such as Loch Ewe on the north-west coast and the Firth of Tay are of particular interest to myself.

You can order The Fortification of the Firth of Forth from our online shop now.