“Portmahomack: Monastery of the Picts” by Martin Carver 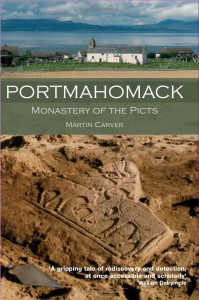 Martin Carver’s work at Portmahomack, in Easter Ross, has brought to light a sequence of churches beneath the present-day church and a cemetery dating from the 6th century, as well as a series of workshops, a mill, a smiths’ hall and later kiln-barn and an enclosure ditch, all dating to the 8th century. In the space of a single academic generation, the Picts have gone from being a ‘problem’ to fully paid-up members of the Insular and European monastic mainstream tradition.

From evaluation (1994-96) and excavation (1996-2001 & 2003-07) to publication in 2008 is a remarkable achievement, all the more so given the date of the Preface and its New Year’s Day signature. But coming from the man who has stressed the importance of ‘analytical destiny’ – of having a clear idea of why we do the things we do, rather than blindly following ‘process’ – this should come as no surprise. It’s nothing less than we would have expected.

The book is described as a preliminary account, as ‘an ambassador for the publications to follow’ (p.xi); it does, itself, however, already follow a suite of academic and popular publications (Carver 2004; 2005; 2007; 2008a; 2008b), including an important paper on the evidence for parchment-making which appeared in our  Proceedings in 2004 (Carver & Spall 2004). As preliminary studies go, however, it packs more than the usual ‘interim account’ for this is a book with not a little substance. It certainly has some big and challenging ideas, concerning, for example, the debt that Insular Christianity owes to pre-Christian and prehistoric belief systems, the role of the monastery in its wider prehistoric and contemporary landscape and the idea of ‘home-grown holiness’ (p.188) for those individuals commemorated on the Nigg, Shandwick, Hilton of Cadboll and Portmahomack monumental cross-slabs.

Evidence for the zoning of different activities, as demonstrated at Whithorn, Hoddom and elsewhere, is also to the fore and there is an intriguing account of the metrology of Building S1 (the Smiths’ Hall) which appears to have been designed on the basis of a 12½ inch foot (pp.126-135). Dubbed the ‘Tarbat foot’, the measure has also been noted among structures elsewhere within the monastic precinct. Meanwhile, stratigraphy, radiocarbon dates, finds and context give us tangible evidence for what is almost certainly a Viking raid on the site – by ‘fire and sword’ (and hammer) – sometime in the period between 780 and 830 (pp.136-139). Delivered with pace and in a lively style it is, as it says on the cover in William Dalrymple’s endorsement, ‘a gripping tale of rediscovery and detection, at once accessible and scholarly’.

How does Carver do this? In part, it’s down to the accessible prose in which it is written. As the reviewer in Current Archaeology (xix, no.7 [2008], 47) noted, he avoids ‘the jargon and excessive formality that turns most archaeological writing into stodge’. But it’s not just language, it’s also structure and the way in which the various chapters and themes are linked and cross-referred to.

In terms of structure, the book is divided into three principal parts: (1) Exploring which sets out the background to the project (or expedition, as the author terms it, appropriately enough given his military background) and its design objectives, as well as providing an overview of what was found; (2)Age of Fame deals with the discoveries in terms of what they tell us about the economy, function, structural development and chronology of the monastic foundation itself, whilst (3) Legacy looks at the broader canvas and Portmahomack’s place within a ritual landscape and as ‘a holy place in history’.

But perhaps one of the keys to the book’s readability lies with a fourth, subsidiary element, termed a ‘Digest of evidence’, a tidy equivalent of the lists and matrices that adorn the walls and surfaces of any large project’s research hub. The ‘Digest’ (pp.203-226) is the archaeological heart of the book, comprising lists of radiocarbon dates and their implications for the chronology of the site phasing scheme, as well as timelines, catalogues and lists of finds, context groups and principal stratigraphic horizons. As Carver remarks (p.203), the ‘Digest’ provides the springboard for future studies of the Portmahomack site and the Tarbat peninsula; importantly, however, it also helps free up the main text in Parts 2 and 3, allowing it to become a carefully constructed narrative of the people who lived, worked and died here, ‘making history’ (p.16) out of the bits and pieces that remained in the ground or survive in the wider landscape.

The book is also richly illustrated, with 84 B&W figures and 16 colour plates. And if a picture really is worth a thousand words, then a good example would be Figure 6.6 (Model of the vellum-making process) and Carver’s inclusion there of a Pictish bull rather than a generic cow. The graphic not only clearly describes the particular process but speaks volumes for the role of cattle in Early Historic society and the added significance that they afforded to a literate, monastic community.

This book will be a key text for monastic studies in North Britain for some time to come. It should also be a model publication for the popular text, perfectly pitched as accessible and scholarly. The final publications will be eagerly awaited.

2004  ‘An Iona of the East: the early medieval monastery at Portmahomack, Tarbat Ness’  Medieval Archaeology 48: 1-30.

2008a Post-Pictish Problems: The Moray Firthlands in the 9-11th centuries (Rosemarkie: Groam House Lecture for 2007)

2008b The Pictish Monastery at Portmahomack (Jarrow Lecture for 2008)