The 2019 Rhind Lectures, entitled “Hadrian’s Wall: A Study in Archaeological Exploration and Interpretation” and presented by Professor David Breeze, are now available free to view on our Resources page.  Click “video” and search! 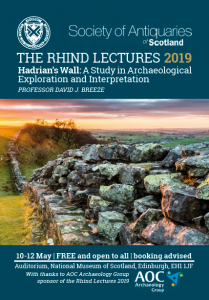 Hadrian’s Wall was written about even when it was occupied. The Romans produced souvenirs of the Wall, medieval scribes placed it on maps, antiquarian visitors recorded the remains, scholars from the Renaissance onwards argued about its date and purpose, and early archaeologists uncovered its walls. The age of modern discoveries started in the 1830s and over the succeeding 150 years a very substantial archaeological dataset has been created. The addition of new material, combined with new approaches to archaeological investigation, ensures that interpretations constantly require review.

These Rhind lectures examine the ways that data has been created, and then to move on to examine specific aspects of Hadrian’s Wall in depth, in particular its purpose and operation over time and its effect on the local population. In the final lecture, we look at the Wall today and some aspects of its future.

The series of six lectures were recorded in the National Museums Scotland auditorium over the weekend of 10th to 12th May 2019 by Mallard Productions Ltd. Sponsored by AOC Archaeology Group.

Professor David J Breeze OBE, BA, PhD, Hon DLitt, FSA, Hon FSA Scot, FRSE, Hon CIfA was President of the Society from 1987-90. He served as Chief Inspector of Ancient Monuments for Scotland from 1989 to 2005 and as Chairman of the International Congress of Roman Frontier Studies until 2015. He has excavated on both Hadrian’s Wall and the Antonine Wall and published books on both as well as on Roman frontiers generally and on the Roman army.