Scotland’s creative potential has been revealed as part of a nation-wide archaeology, art and photography competition.

Dig Art! 2015 received hundreds of spectacular entries from across Scotland, from paintings and photographs, to cakes and cartoons. Participants ranged from five years old up all the way up to 70, and they all took their inspiration from thousands of years of history.

The winning images were chosen by a panel of expert judges, composed of celebrated photographers, archaeologist and sculptors. Their selections reflect the diversity of archaeology in Scotland, including mysterious early prehistoric rock art, the delicate golden bird pin from the Viking Age Galloway hoard, and a rare perspective on the famous site of Skara Brae from hundreds of feet above.

“One of the best prizes on offer is the opportunity for these artists to see their work displayed during the European Association of Archaeologists Glasgow 2015 Conference and ‘Our Place in Time Arts Festival’ in September. This festival, which is open to everyone, will bring the conference out to the city through a programme of sculpture, films, festivities and photography exploring the theme of archaeology.”

Congratulations to Fellows Lynn Fraser, Dr Jonathan Benjamin, Alex Hale, Clare Yarrington, Marion O’Neil and John Pickin who are winners of runners-up. You can read the full list of winner here Dig Art! 2015 Winners & Runners- Up List. Here are some of our favourites. 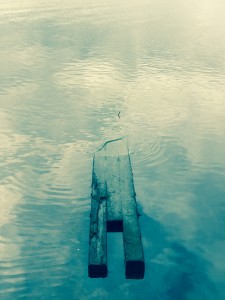 A is for Archaeology’ captures the last remains of the slipway at John Brown’s Shipyard at Clydebank – a surviving fragment of the industrial archaeology. Alex Hale’s photograph won the ‘Archaeology Is…’ over 25 category as part of Dig Art! 2015.

‘Misty Morning Start’ was taken by Lynn Fraser during excavations on Comar Wood Dun, Cannich, Strathglass in September 2013 by Lynn Fraser, as they attempted to delve into the Iron Age on site. Lynn won the ‘Snap It’ over 25 category as part of Dig Art! 2015. 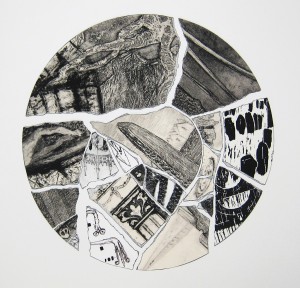 Composed of scraps of previous prints and drawings, each fragment reflects a different time in our past, connecting objects and sites from Scotland, Britain and Europe. ‘Fragments’ by Clare Yarrington won the ‘Putting the Art in Archaeology’ over 25 category as part of Dig Art! 2015. 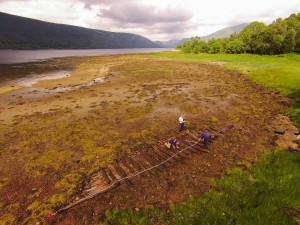 ‘Unknown Historic Vessel’ by Dr Jonathan Benjamin was captured as the archaeology emerged at Loch Fyne on the west coast of Argyll and Bute. Benjamin was a runner-up in the Wish You Were Here’ over 25 category as part of Dig Art! 2015. 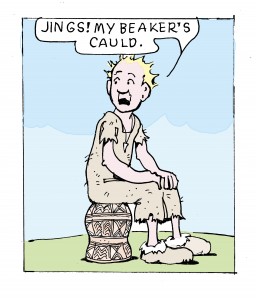 The judges loved the attention to detail in ‘Jings. My Beaker’s Cauld’ and awarded it a special commendation in the ‘Putting the Art in Archaeology’ over 25 category as part of Dig Art! 2015. 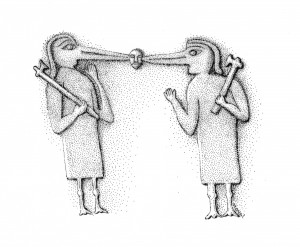 Marion O’Neil’s work comes from the Papil Stone in Shetland, and features a “bizarre and enigmatic image”: two bird-headed figures pecking a human head. ‘Papil Stone, Shetland’ was a runner-up in the ‘Putting the Art in Archaeology’ over 25 category as part of Dig Art! 2015.

Dig Art! 2015 was coordinated by Dig It! 2015, the year-long celebration of Scottish archaeology, and Forestry Commission Scotland, who encourage everyone to be inspired by the natural and cultural heritage within Scotland’s forests and woodlands. Hundreds of additional Dig It! 2015 events are available online at www.digit2015.com.